Macy’s preparations for the Christmas season in 1948 required 14,000 employees to prepare for a rush of 250,000 daily shoppers 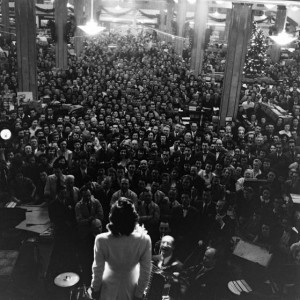 Black Friday wasn’t yet called Black Friday in 1948—nor do the newspapers from that era offer evidence of stampedes or overnight lines that have become par for the course on the day after Thanksgiving—but the kick-off to the holiday shopping season has long been a red-letter retail day. Images of preparations for that season at Macy’s—then, at one million square feet, the biggest store in the world—bespeak a highly orchestrated operation relying upon 14,000 employees to ready 400,000 items to be swept off of shelves by 250,000 eager shoppers.

Planning entailed both logistical and motivational efforts. At a giant pep rally, the morale of staff members was lifted by a harmonious rendition of “Jingle Bells.” Telephone operators prepared to respond to as many as six questions per minute. Plainclothes employee detectives trained to spot shoplifters from among the hordes. And clerks readied themselves to handle fluid pricing on that year’s hottest items—from striped pajamas to “simulated” pearls to Macy’s house-brand Scotch—which fluctuated as many as five times per day as reports of competitors’ pricing came in.

When all was said and done, when the bargains had been scored and the pajama sets sold, all that was left behind was one million square feet of a giant, heaping mess.